◀ Something New MC Furneaux Pinot Noir
How do I get my hands on Charles Fox MCC? ▶ 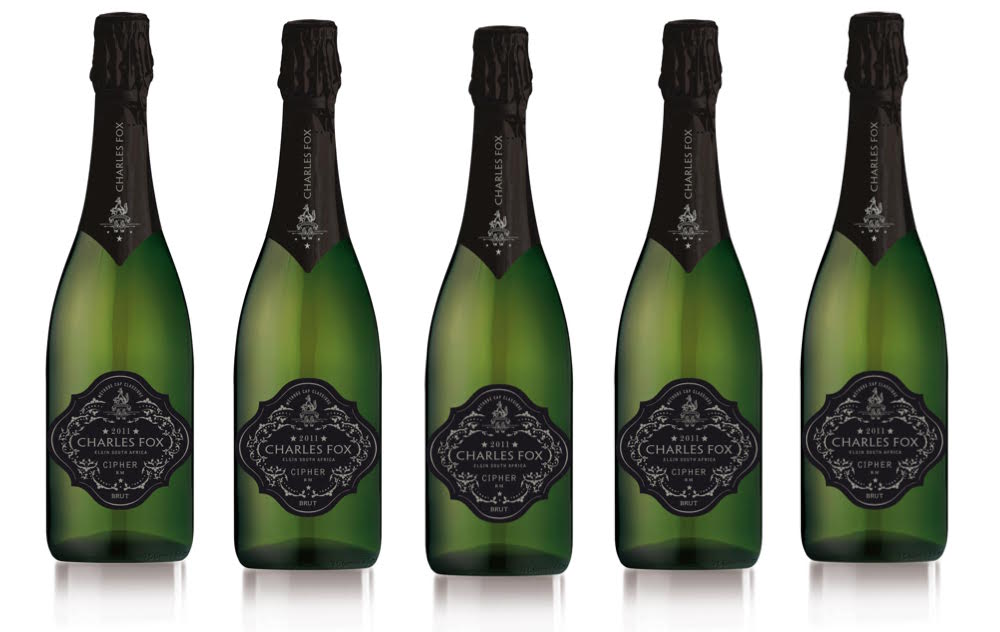 The Cap Classique for the Connoisseur

Aged in their World Class, MCC-dedicated, underground cellars for four years, Cipher is an extraordinary infusion of the estate’s  top quality Cuvées, produced from grapes cultivated in the country’s most conducive Cap Classique terrior. Charles Fox regards this as his pièce de résistance, and according to celebrated French Wine Consultant, Nicolas Follet, “Cipher posses the depth, character and quality standards of French Champagne!”

The Furneaux Estate, once a fruit farm in the Cape’s Elgin Valley – home to many of the country’s most regarded winemakers – was bought and transformed a decade ago, following three years of searching for the right site, by Cap Classique devotees Charles and Zelda Fox. “The cool climate in the Elgin Valley perfectly emulates the environment in which the original style of French Champagne is created”, says Charles. According to the Foxs’ International Champagne Consultant, Nicolas Follet, an oenologist who specialises in sparkling wines, “Furneaux’s site suitability is ideal for growing the three classic French champagne varietals – Chardonnay, Pinot Noir and for South Africa, the relatively rare Pinot Meunier, that thrive in the area!”

The Charles Fox 2013 Prestige Cuvée, Cipher, is made from 50% Pinot Noir and 50% Chardonnay grape varieties. In appearance, a rich champagne colour with a fine golden mousse. On the nose, hints of citrus and a creamy nuttiness of macadamia and cashew, followed by biscotti and ending in an inviting freshness. On the palate, bold citrus of lemon rind up-front, with an exceptional depth of rich brioche. This Cap Classique is the true noble balance between strength and elegance – an exceptionally timeless Cuveé that will be enjoyed for many years to come!

The name Cipher was carefully chosen, as Charles explains, “Cipher – meaning both a code, or the number zero, epitomises our code of excellence, and zero compromise – not to mention our secret to successful winemaking! We are the only Cap Classique wine Estate in the country, determined by the fact that from grape to bottle, everything is grown and made on the estate. We are in a very fortunate position to be able to make only vintage cap

classique wines of superior quality. We produce only Vintage Cap Classique, aged on the lees for a minimum of two years, leaning towards a dryer style. Our wine making philosophy, inspired by Nicholas’ respectful approach to nature, gives our MCC’s a natural roundness, texture and fruitiness with a low sugar, low alcohol and low sulphur content thanks to the magical CO2 bubbles!”

Only 3,500 bottles of the Cipher Prestige Cuvée were produced, underscoring the boutique brand’s exclusivity.

According to Zelda Fox, “The tiny bubbles in MCC provide “texture” to the wine that enables it to stand up to much heavier foods rich in flavour. Cipher pairs well with hors d’oeuvres like shell fish, oysters, lobster, brie, and mature cheeses like camembert and goat’s cheese.”

Since planting their first vines in 2007, they have sold out of their Brut and Brut Rosé production! Not surprising for a tenacious achiever like Charles who was the youngest swimmer who competed in the 1964 Olympics.

South Africa’s wines have built up an enviable reputation, not just in their home country, but internationally. Cipher shows that when it comes to producing sparkling wines that reputation is enhanced by bearing comparison with the best available from anywhere else in the world.

Cipher can be purchased directly from the estate, which is open Monday – Sunday from 10am – 4pm for tastings, sales and private cellar tours. Cipher can also be obtained online from selected wine merchants across the whole of South Africa.